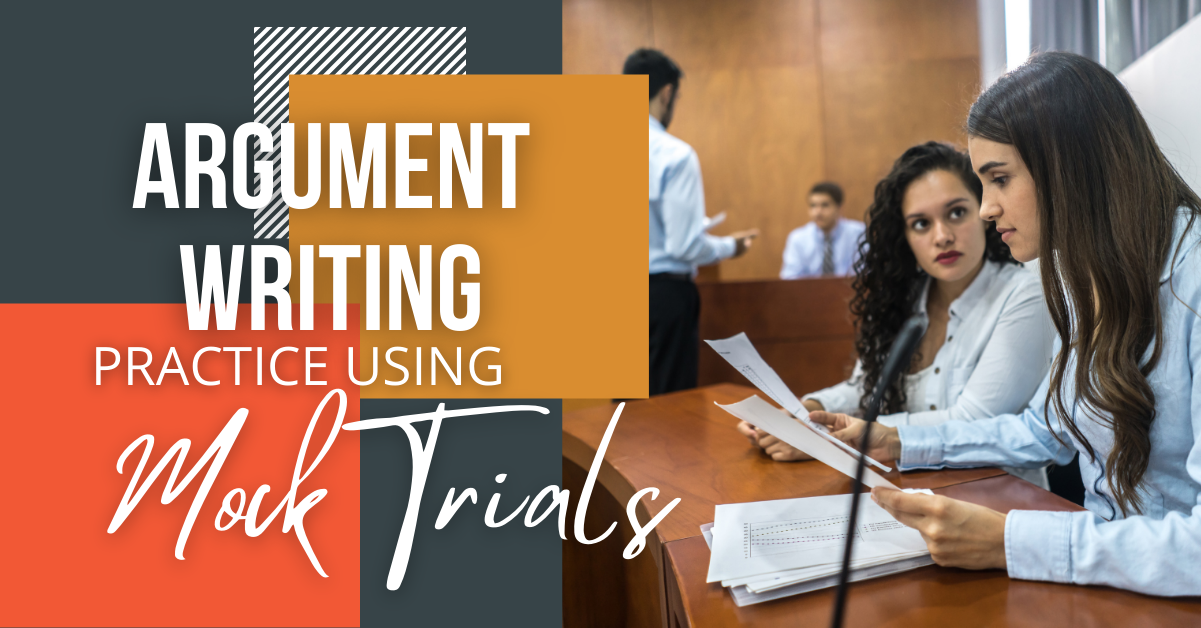 I remember seeing Metamorphosis on our 9th grade pacing guide and thought that my district was CRAZY for requiring it for ninth graders yet it turned out to be one of my students’ favorite stories especially the culminating writing activity in which we put the characters on trial using mock trials to practice argument writing. Looking to spice up your argument writing lessons? Look no further than mock trials.

Mock trials are high on student engagement while working on essential skills needed to do argumentative writing.

Here in Florida and many other states, some of the key concepts for successful argumentative writing includes:

What better way to practice these writing skills and assess them than with a courtroom trial. Here’s how I did it with The Metamorphosis.

In Metamorphosis by Franz Kafka, the main character, Gregor Samsa, wakes from an anxious dream to find himself changed into a bug. At first, his concern and those of his parents and sister whom he lives with centers on him not being able to go into work. Work as a salesperson is integral to his life as the breadwinner of the family. Now that he has been transformed and cannot work, the burden of his care is now left to his family. What transpires throughout the plot and revealed in the characters’ thoughts, actions, and words leaves his eventual death up for debate and the door opens for the perfect murder trial.

Students were randomly assigned to either the prosecution or defense and they had to decide on their case strategy. In other words, what is their position as to the cause of Gregor Samsa’s death and how they plan to prove it. (For extra support, some class periods were provided with their case strategy and they then had to build the evidence to support it). Students were able to call witnesses such as other characters like the maid or had the ability to create a witness such as the first officer on scene or the medical examiner.

They were provided with about two 50 minute blocks to prepare their case before the actual trial. Because I have larger class sizes, there was one case with a set of lawyers for each parent and Grete, Gregor’s sister, so in total, three different cases per period.

Lawyers had to lay out their case in an opening statement, question witnesses on the stand, and wrap up their argument with closing statements. As we listened to each case, myself and other students tracked each side’s evidence and in the end evaluated if the prosecution or defense made the stronger case and thus if the family member was guilty or not.

This was time for reflection on how well each side built their case. Through this feedback students are able to see how cohesive and on track their argument was.

In all, this took about four class periods and all students were engaged in their various roles and thoroughly enjoyed making their cases. They refined their understanding of choosing the best evidence and putting it all together in a cohesive way which is what is needed for a strong argumentative essay.

Liked this activity? Subscribe to my email list to be the first to know when a new blog or TPT resource has dropped.